Every so often in the evolution of a city, a building takes shape that marks the start of a new chapter in urban history. AlMulla Plaza was that defining moment. Making its mark on the Dubai landscape in the late 1970s, the stylish landmark ushered in the era of multi-use property with the novel concept of duplex residential apartments and commercial premises holding hands. It set a trend that is now an integral part of Dubai’s urban architecture.

The sprawling, stylish structure of AlMulla Plaza dominates the landscape from an unmissable sightline. It symbolizes the characteristic innovativeness of Mohamed & Obaid AlMulla Group that challenges the status quo to create new examples of form and function. The taut and fluid lines of AlMulla Plaza’s façade offer a clear expectation to residents of the possibilities within. The bold unambiguity of the architectural lines of the residential apartments, commercial premises, and exhibitions halls, flow in seamless unity. They are beautiful examples of vision and purpose.

When linear-concept assets uniformly defined the prevailing mood in real estate, AlMulla Plaza broke with tradition to offer the first, and original, mixed-use real estate development, bringing new energy to the urban landscape. It made people see the excitement in interacting with dual-purpose environments in a shared space.

The spacious duplex apartments set a new standard for apartment spaces and became an aspiration for residents to enjoy a new-concept address. 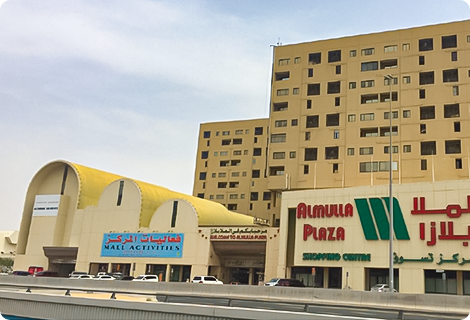