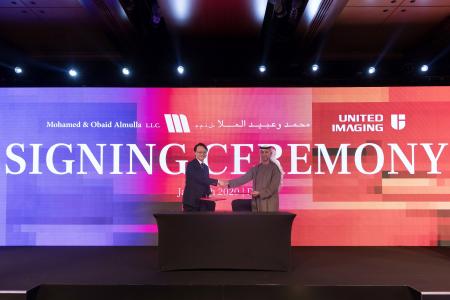 Dubai: Catering to the growing demand for the medical technology in the UAE, Mohamed and Obaid Al Mulla Group, one of the leading global and regional business and leisure company in the Middle East, has signed a strategic partnership with United Imaging, a global leader in advanced medical imaging radiotherapy equipment and medical technology.

The partnership seeks to further progress upon national strategies to make Dubai and the UAE as a whole a hub for technology and the focal point of patients across the region and beyond.

Based on the partnership, Mohamed and Obaid Al Mulla Group will be the exclusive provider of the most advanced nuclear medicine imaging and radiotherapy systems of United Imaging in the UAE.

James Xia, Co-President of United Imaging, said, “United Imaging and Mohamed and Obaid Al Mulla Group share the same vision to apply more frontier technologies to precision medicine and to benefit the locals. As a group company, United Imaging develops a full portfolio of advanced medical imaging and radiotherapy equipment, AI solutions, medical robots, smart wearables and more. This landmark deal between the two groups will strengthen ties and create more opportunities for extensive healthcare collaboration and market expansion in China and the Middle East in the future,”

Sherif Beshara, Chief Executive Officer of Mohamed & Obaid Al Mulla Group, said, “Our commitment to the well-being of the nation and the region is reflected in our efforts to find and collaborate with specialists and pioneers across the globe. We seek to cater to the rising demand for quality medical technologies in the UAE to bridge the substantial demand and supply gap in the country.”

In only 9 years, United Imaging has developed long-term partnerships with world-leading hospitals and research institutions, including top universities in the United States such as University of California, Davis and Washington University School of Medicine ST. Louis. Its products have been installed at over 4,000 institutions in 22 countries and regions, including USA, Japan, Europe, Southeast Asia, South America, Africa and Middle East.

In order to better serve the Middle East market, a regional Headquarters has been set up at Dubai in 2019 with an experienced marketing and customer service team. In less than one year, United imaging’s devices have been installed at many top hospitals in Egypt, South Africa and Morocco.

The Mohamed and Obaid Al Mulla Group set its footprint in Dubai over the span of 75 years and played a major role in the renaissance of the national economy. The group focused on key business sectors for its investments and operations, and had a remarkable success in all the fields they stepped in. The group has pioneered in the pharmaceutical industry with its brands Unimed & Monrol and has become a major healthcare provider in the market with American Hospital located in Dubai. In the field of hospitality and hotels, the group owns a series of prestigious hotels which includes the  Ramada Jumeirah Hotel, Crowne Plaza Deira & Eshraq Dubai. There are soon to be launched hotels which will be launched in the area of South Dubai, which will include the Holiday Inn and Starbridge Hotel Suites. The group further expanded in to the real estate field, where they will manage and invest in a group of residential and commercial properties. One of Dubai’s historic building, Al Mulla Plaza a shopping centre which as launched in the early seventies of the last century is managed by the group.